In Werner Herzog’s wild film Aguirre: The Wrath of God, which we recently screened upstairs in the Advocate, the main man Aguirre goes mad in pursuit of the fabled city of gold, El Dorado. He co-opts a royal expedition on the Amazon and presses madly on down the river, drunk on pride and the scent of immortality.

One scene brings a pair of natives to the raft; they have come to tell about a prophesy. But Aguirre sees a gold necklace on one of them, and loses his composure. Where did you get that? he growls with crazy eyes, Klaus Kinski eyes. Where does this gold come from?

Aguirre’s madness is to go on downstream when there is nothing there but death. His madness is the promise of the origin, the mirage of a city that rises up out of a necklace. He assumes there has to be a single source. On and on downstream, the raft of Aguirre. I am the wrath of God, the crippled Spaniard bellows at the silence. Who else is with me?

Herzog’s camera swings in a dizzying circle. The jungle does not move—only the raft does, and the camera. Aguirre himself is finally still. The only movement on the raft is the monkeys.

The filming of Aguirre was its own ordeal—think a German New Wave Apocalypse Now. But where Aguirre the madman fantasized of arriving at the source, Herzog’s own imaginative expedition took him only as far as the river. Both these men were megalomaniacs, in their way, but we think warmly about one of them.

A number of great rivers and shores mark this issue of the Harvard Advocate. Some are imagined, some are quite literal. Through the theme of Origin, we wanted to indulge an age-old fascination with the times and the places of beginning. It was important to us that the word not be pluralized. It would be Origin, not Origins, so that each contribution had to face the same but separate challenge: the inherited structure of a singular yearning. Each text, that is—however compliant or disruptive—would be thought of as its own expedition.

The theme is fitting in a year where we have made bold strides forward as an organization—into the digital landscape, through our new blog and updated social media presence, and also into our history, thanks to our exciting collaboration with the metaLAB@Harvard and the University Archives. It has been our aim to move past the nostalgic languor of being “historical” and to start animating our history in illuminating ways. For our blog’s weekly column, members have been digging through the archives—leafing through messy piles of bound volumes in the Sanctum—and a variety of gems have come to light: the early work of Wallace Stevens, as expected, but also a scandalous excerpt from Henry Miller, some fascinating advertisements, and a number of poems submitted by one Lou (here “Louis”) Reed. 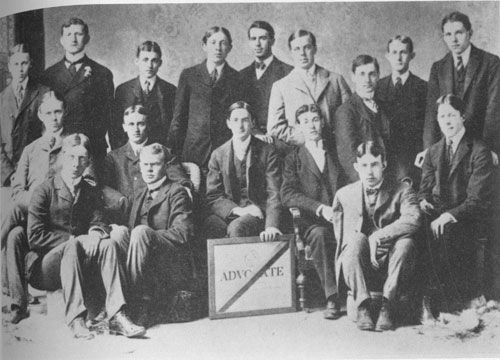 The cooperative process of creating and developing Notes from 21 South Street has allowed us to expand the Advocate’s presence beyond our four static issues per year. We have endeavored to share online something of the wonder we find within the four walls of the Advocate house: a wonder based as much on collision as it is on intention—those chance meetings, collaborations, and discoveries of new ideas that take place outside the boards’ official mandates. The Advocate this year has been inspired not only by its young and energetic membership but also by the new connections we’ve forged outside the magazine, from our new allies in the digital sphere to the friends we made at our open-to-all January writers’ workshop. To all of these, our heartfelt thanks.

We hope that you enjoy the Origin supplements on the blog and see them, along with the rest of the work published there, as an effort to share the bustling life of the building with our readers. The historical supplement, which will be released this coming week, was designed with similar intentions.

At 21 South Street, surrounded by traces from some of America’s greatest writers, it is easy enough to think—with Umberto Eco (or with the Kinks)—that all the stories have already been told. By getting our past off the shelves and into our hands, however, we seek to make our history available for play and variation. Nostalgia has the power to lure us, like Herzog’s Aguirre, towards a false authenticity, and to leave us lethargic thereby. In the production of the Origin issue, our interest has been rather in the expedition itself, because it is there that we see the realest work of imagination.

Andreas Huyssen writes that remembrance, too, is a pole of utopia. With this in mind, we offer you Origin. After Blueprint, after Fanfare, I like to think of this issue as the long walk back after a night out—towards home, perhaps, or to wherever you end up.

You can view this blog post and more at the Harvard Advocate's blog, Notes from 21 South Street.